The boys once again participated in the annual Hershey's Track Meet this past week. It was Gabe's fourth year participating. That's right, his fourth year! That just seems unreal to me. Where does the time go? This was Cooper's second year participating.
Gabe's performance was typical, for him. He was there to compete and nothing else. So determined and such a true competitor. He chose to do the long jump for the fourth year in a row. And for the third year in a row, Gabe placed in the long jump winning first place this year. The boy can jump!
Gabe jumping for first place in the long jump. 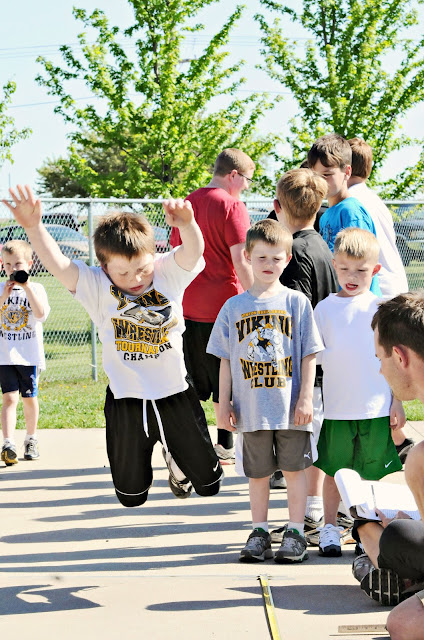 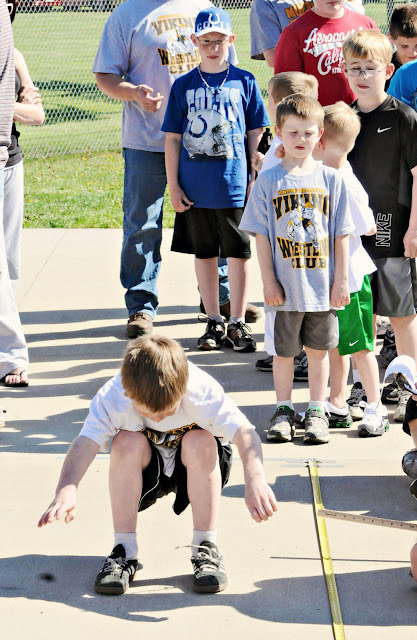 I gave Gabe complete control over what he chose to compete in when filling out the registration form weeks before the event. I usually ask him what he wants to do, but when he says, "I don't know," I would usually then go ahead and sign him up for what I thought he might like to do. Well, this year, I wanted him to choose so that he couldn't tell me, "Mom, why did you sign me up for that?" Yes, complete control, with no leading, or pushing, or trying to influence him in any way. Note to self: complete control given to Gabe equals a very long process.
I kept asking Gabe what he wanted to sign up for. But he just could not decide. He knew he wanted to do the long jump and two running events, but he just couldn't for the life of him decide which two running events to choose. I had Cooper's form filled out about a month before Gabe finally made up his mind the day before the registration deadline.  Gabe finally decided to do the 50 meter once again this year, and chose to do a new event: the 200 meter. And although I was a bit nervous that he may run out of steam in the 200, Gabe proved me wrong once again. Why I ever think of underestimating his determination is beyond me. He never fails to show me that my doubts are unfounded when they are up against his sheer will to win.
Gabe (second from the right) running the 200 meter dash, in which he got 1st place. 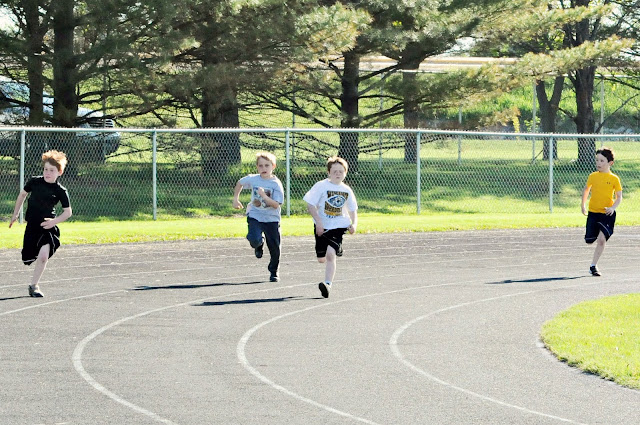 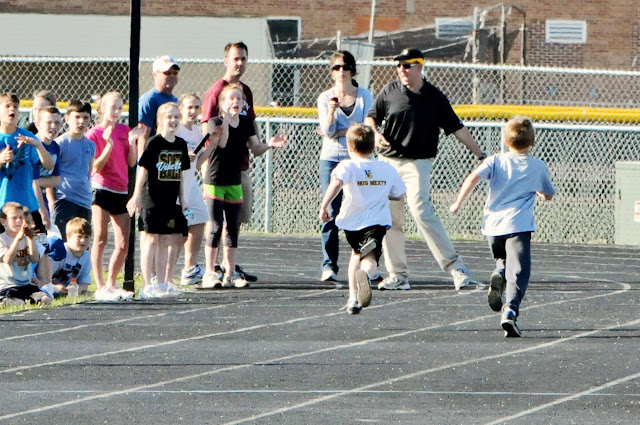 On to Cooper. Last year, if you recall from my post, Cooper had said before the event, "I only hope I win one ribbon!" And he did. But this year was a different story. I don't know if it's his first year of wrestling this past winter that has changed Cooper's perspective. Maybe it was winning so many first place trophies throughout the season, and finally placing fourth in the state at the end of the season. Whatever it was, something had changed because this year Cooper really, really wanted to win first place. Second and third just weren't good enough. Talk about a 360!
So, Cooper chose to compete in the long jump, the 50 meter and the 100 meter dash, the long jump being his first event.
And, Cooper got second place. 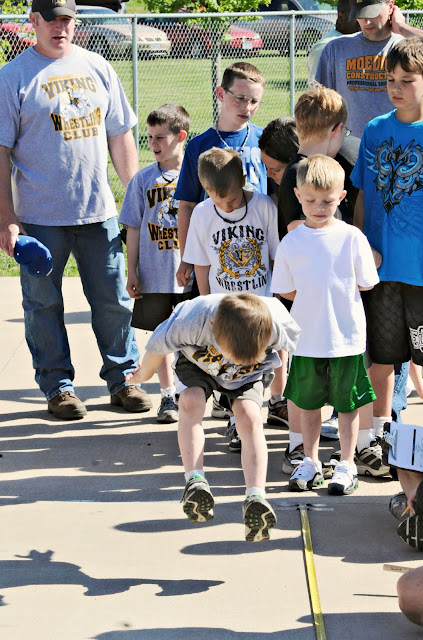 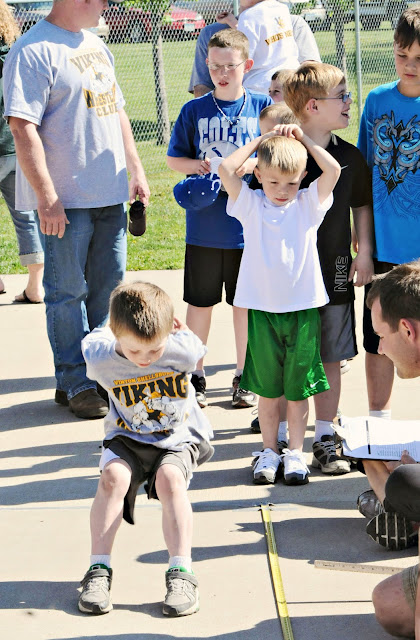 He said to me with a sly grin upon finding out he placed second, "Second is ok, but maybe next year I can get first." What? Is this the same Cooper that only wanted to win just one ribbon last year? Now we're being discriminating as to which one ribbon it is?
Next up was the 50 meter. I think the fact that you're running at the same time as everyone else made this very different than the long jump, when you're jumping individually. In Cooper's mind the competition was ON! Cooper ended up getting second in his heat, which was bad enough for him. He was not pleased. Then they announced over the loud speaker that he got third overall. Having to explain to Cooper that there was more than one heat and they have to consider all heats in his age group before they award places was too much!
No, he wasn't mad at anyone else or being a poor sport. There were no fits. He did congratulate his friends with the most sincerity. But, he also kept saying he knows he can do better. Who knew so much determination could be in such a tiny little 42 pound body?! He's already started practicing his running form for next year, ha!
Cooper running the 50 meter, in which he placed third. 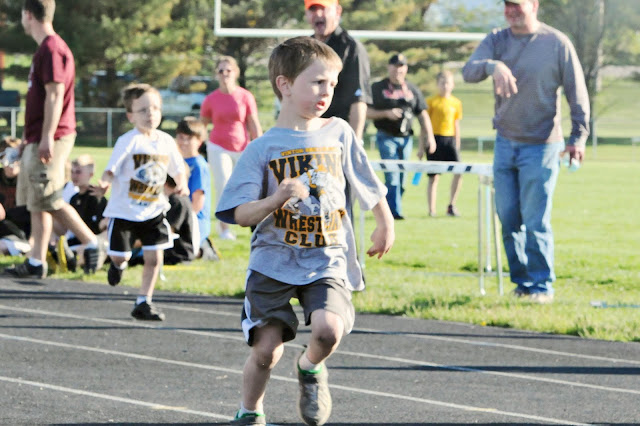 Cooper did not place in the 100 meter. The official results haven't come out, but I'm guessing he didn't miss placing by too much. Cooper didn't care for that logic though, saying "they don't have a fourth place ribbon, mom!" Ha!
So, here I am with two boys who love to compete and do so to win. I guess that's what being an athlete is all about! And I'm so thankful that my two athletes are good sports, no matter what place they achieve. 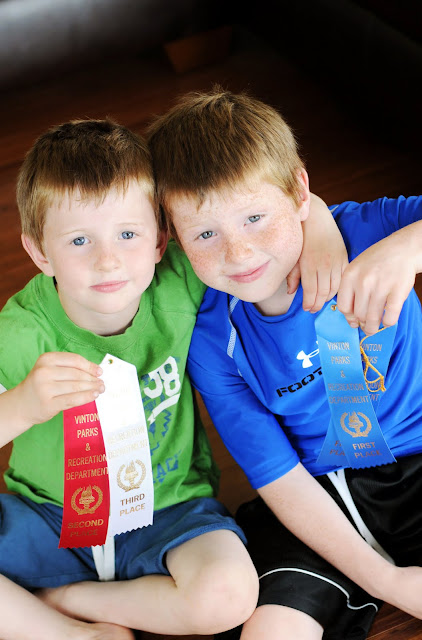 Congratulations Gabe and Cooper! Those are quite the acomplishments!!!