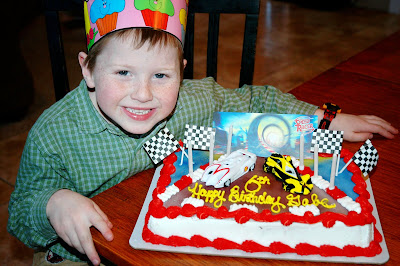 It truly amazes me that it was six years ago that we welcomed our first little {no, make that BIG} baby into the world. At just over ten pounds, he seemed more like a three-month-old than a newborn, but today is becoming more and more of a big boy.

What can I say about Gabe. I am so proud of the boy he has become. Hardly a day goes by where Gabe doesn't ask me, "Mom, is there anything I can do to help you?' Gabe is kind and thoughtful for such a young man.

He's also independent, as he has been from day one. The strong willed spirit that was a handful as a toddler has now been molded into a drive and determination to accomplish. He always knows what he wants and works hard to achieve it. I'm sure this is a trait that will serve him well throughout his life.

Curious and observant are two other words I would use to describe our newly turned six-year-old. Gabe likes to know everything, to understand everything, and is always asking questions. Lately, he's really beginning to understand what it means to place your faith in Christ and live for Him. I know he's on the brink of truly grasping God's gift of Jesus's life to us, and nothing could bring me more joy than seeing my children grow to the point where they can really make a decision to live their lives for the Lord. After all, that's our call as parents, to raise our children up in the ways of the Lord so that they will not part from Him. My cup overfloweth just thinking about it! I can see the potential for Gabe to be a great leader someday, just like his dad. We already know he looks just like dad, might as well be just like him too!

I can't imagine my life without Gabe in it, nor would I ever want to. He's a blessing to our family, a wonderful big brother and son.

{Gabe's silly face makes me laugh!
Really, what kind of smile is that!?!} 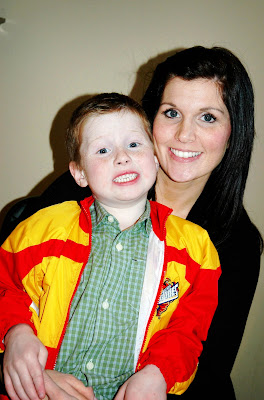 I knew that was it!

We were in the Durango driving the other day and out of the blue, Cooper asks me an interesting question.
"Mom, why are all the girls always telling me that I'm their girlfriend {he means boyfriend}?"
I reply, "I bet it's because you're so kind and sweet Cooper, and they want to be your friend."
Cooper thinks for a minute, and then responds, "Yeah. And because I'm so cute."
"Yes, I do have to say that you are pretty cute Cooper," I said.
Cooper then replies, "Yup. I knew that was it!"
I looked back in the rear view mirror, and Coop had a similar smile to the one in the below photo I took last night at Gabe's vocal concert... 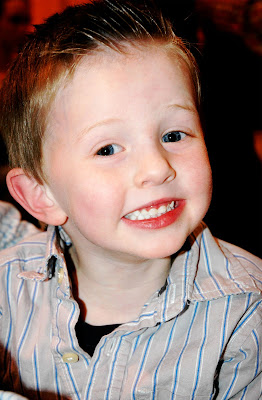 With that smile, he's quite the charmer.
Boy, am I in trouble with this little ladies man!
Posted by Unknown at 2:49 PM No comments:

More than we wanted to know! 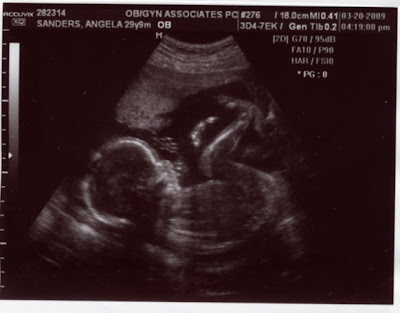 I am 20 weeks pregnant and went in for my ultrasound yesterday.
You may remember this post, in which I explained that we were not going to find out the sex of the baby.
Well, the baby definitely had different plans.

All was going well.
As the ultrasound proceeded, we saw that the baby had two legs, two feet, ten fingers and ten toes.

And then, the ultrasound technician switched to 3-D imaging, and we saw more than we bargained for.

As soon as the 3-D image came onto the big screen, we see the baby laying there with legs spread wide open, very blatantly revealing that...


There was no mistaking it! The technician tried to quickly turn off the image, but it was too late. Jason and I looked at each other with shock, thinking, "Is that really what I think it was?"
And the technician said, laughing, "I hope you were wanting to know the sex, because I'm thinking that was pretty obvious!"

Yes, it was obvious indeed!

Needless to say, our little baby boy is not so shy. The technician said he'd been flashing her throughout the ultrasound and she'd tried to quickly skim over the images and relocate to something else. We hadn't noticed the flashes of truth until the 3-D image, because unless you know what you're looking for, it kind of all looks the same.

I guess we can predict that our new little Sanders boy will be an outgoing soul!

But seriously, this would only happen to us.
Even the ultrasound technician said that in her many years of doing ultrasounds, she has never had the sex of the baby be so blatant to everyone in the room!

Here's the 3-D images. We don't actually have any images with the obvious anatomically correct features, but got some pretty cute poses. By the way, the 3-D images still amaze me! 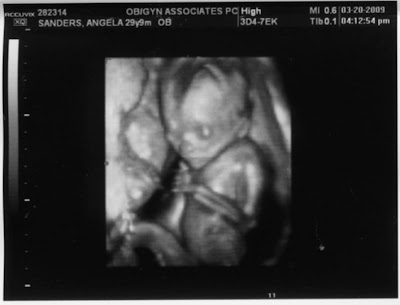 Here's our little boxer. Can you see his little hands up protecting his face from the punches. Good job little guy! 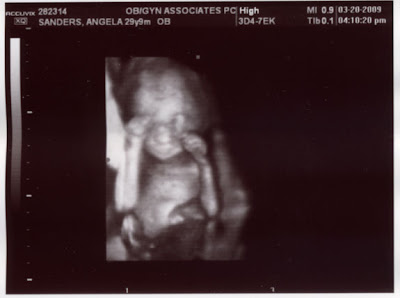 This morning we told the kids and showed them the photos. I think Gabe's still in shock, because as I've mentioned before, he'd predicted a girl and he's never been wrong before.

Cooper was happy, but later told me that he does want Chloe to have a sister.
I told him, "that just isn't in God's plans for our family right now."
Coop's reply was, "But I want God to plan for us to have another girl!"
Ahhhh.
I thought I just had to worry about taming Jason's need for endless children, but I guess I have Cooper to worry about too!

Above all, we are so thankful to have another healthy baby blessing our family, and looking forward to finding out what his personality will be like and how he will add to our family.

As far as names go, we're completely stumped.
Had it been a girl, we had a few possibilities in mind. But boy names escape us.
Any suggestions?
Posted by Unknown at 11:43 AM 4 comments:

I wanted to dedicate a quick post to my best friend Julie.
Today she turns 30, and if it weren't for the many miles between us {Julie lives in Colorado}, we'd be celebrating this milestone event together.
What a wonderful friend you are, and what an awesome child of God.
I am blessed to know you.
Miss ya and love ya Julie! 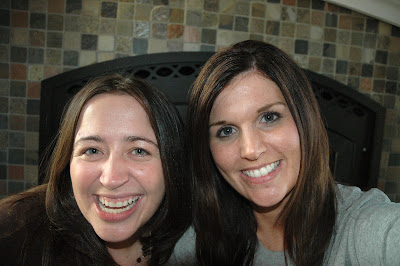 I guess now is the time I should write the public apology that many a blogger has written on their blog for neglecting their blogging duties.
Yes, it's been almost two weeks since I last blogged!
I've never gone that long without blogging since starting this site last year.
Please accept my sincere apologies!

So what have I been up to?
Well when last I blogged, Cooper and Chloe were both sick. They both ended up having ear infections, which have hopefully now cleared up. I have to take them both back for re-checks this week, so time will tell if they've fully recovered.

Despite being sick, I've also been busy with my design work. At least it's been the fun part of my job...designing invitations. I've done a wedding invitation, a bridal shower invite and a corporate fundraiser banquet invitation all within the last week. But honestly, I love designing invitations, so it's been fun. Much better than designing car dealership advertisements, which was my last project.

Anyway, today I got a call home from the school and Gabe was in the nurse's office with a fever. Just when I thought we were on the road to recovery, we have yet another setback. Hopefully it doesn't continue on to Jason!

Needless to say, my busy life has left little time for my hobby...photography. I searched my camera memory disk and the only photo I've taken in the last two weeks is this one... 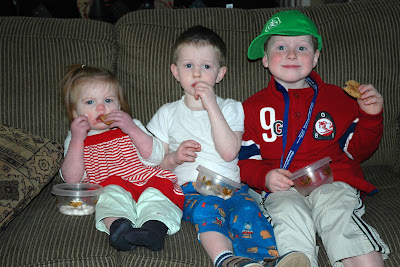 Just a photo I snapped real quick while the kids were sitting together, but it does makes me smile. Let's face it, seeing all three kids sitting side by side peacefully just doesn't happen very often. And just think, in a few months, they'll be one more sitting in the lineup!

It truly seems unreal that I turn the big 30 this summer and also will be a mother to four children!

Time really does fly by doesn't it!?!

I promise, I will not let two more weeks fly by again before my next post!
Posted by Unknown at 3:24 PM No comments: