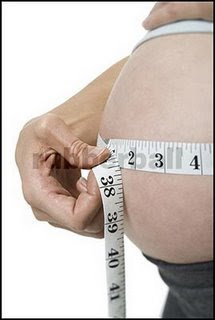 { The above photo is courtesy of 'Rubberball,' a royalty free stock photography website, and is not me ;) Just thought I'd clear that up.}

I am now 33 weeks pregnant.
I had a doctor's appointment yesterday during which my doctor wanted to do a Fetal Fibronectin test. I had never heard of such a test, but apparently the test is able to pretty accurately predict preterm labor. If positive, the chances are good you will have a baby within the next two weeks. If negative, chances are this baby isn't making its world debut for at least two weeks from the test date.

This test was ordered due to the contractions I've had since coming down with pneumonia. Since I've never had a preterm labor before, my doctor is thinking the test will be negative and the baby will hold off. We're hoping the contractions are just a result of the dehydration I've been experiencing and that my efforts to increase fluids will alleviate any problems.

My doctor also informed me that I'm still measuring small for 33 weeks. No surprise there. I've measured small with all my pregnancies. In fact, I measured small with my first pregnancy all the way through, and as I've mentioned before, Gabe ended up weighing 10 pounds when the doctors had estimated I'd be having a 7 pound baby. So, as with my other pregnancies, I will be having another ultrasound at 36 weeks to more accurately estimate baby's size. I was on the verge of requiring a c-section with Gabe, and we would like to avoid that if possible. After all, who wants to have another 10-pounder?!? Definitely not me!

One other fact I learned during my appointment is that baby's head is very low. That was not a shocker to me, as I can feel the pressure every time I walk. Could this be a sign of a sooner-than-later birth? As the doctor said, time will tell.

All in all, everything is looking good. Our baby boy seems very healthy. And although I am still very tired, anemic and recovering from my recent sickness, I am reassured that I can make it to the end for the end is drawing near! After all, the Lord has helped me this far. I think He can bring me the rest of the way. Only a handful of weeks left!
Posted by Unknown at 9:24 AM

Hold off baby .. June is already pretty booked for your mom and dad! At least wait for July so you can have your own month to celebrate all your own! (And August is way cool for a birthday let me add.)

Now if that is your picture on your blog I am envious of the small number on the tape measure! Granted, you're at 33 weeks ... but by week 35/36 I was 47 inches girth! Obviously, I measured somewhat large with my boys, ack! And I have the stretch marks to prove it ... yikes.
It's hard to believe now that Nolan has not stayed a linebacker. Hang in there though ... the end is the toughest ... okay, no it's not ... but you can see the finish line oh so close! Don't eat eggplant as I've heard that can bring contractions.