Since doing a post about my look-a-likes, I was reminded of the time that someone claimed Jason has a look-a-like:
Christian Slater.
*Insert Laughter Here*
Yup, that's right, Christian Slater.
I'm not really seeing the resemblance, but I thought I'd present the evidence and let you decide...
BTW, since rising to stardom in the 80s & 90s, Christian Slater seemed to disappear from the radar until now. He's actually going to be starring in a new television series that looks pretty interesting titled, "My Own Worst Enemy," in which he plays a character with a split personality.
Could his alter ego be Jason? You be the judge...
*Since they look so much alike, I'd better clarify
that Christan Slater is on the left, Jason on the right.
And, I'm hoping you're getting my sarcasm,
cause I'm laying it on pretty thick, lol.* 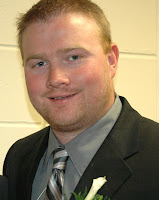 Well....their tie and suits look quite a bit alike... Not so much their faces :) or hair for that matter.. This post made me laugh...

I really thought that you were married to Christian Slater. Your husband's name is Jason? lol! LOVE the sarcasm in the post :-)