If you're the type of person who notices the little things, the details like the little notation after a post that says when the post was published, then you'll notice that this post is published in the middle of the night. Yes, it's 2:26 a.m. as I write these words. I can't sleep, so why not blog.
I was thinking about our littlest joy, Chloe, and how fast she's growing. I was also thinking about all the new words and funny quirks she exhibits everyday. Then, I was thinking I should write these new advances as of late down before I forget them and they're lost forever.

So here it goes...a list of random facts about Chloe.

1. Sometimes when Chloe gets herself laughing really hard, she covers her mouth like this: 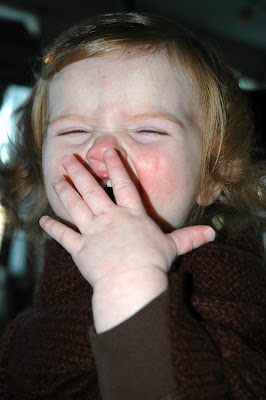 2. Chloe can sense when we're getting ready to go somewhere. When she thinks we'll be leaving the house soon, she goes to the stairs or the door and waits, saying, 'Ready?' in a high-pitched voice over and over again. The boys love it, and they start humoring her, saying 'Ready Chloe?' back to her. It's an endless cycle that's cute at first but will drive you nuts after awhile, and causes you to hurry even faster to actually get ready and leave for your destination. Maybe it's all part of Chloe's little plan to get us to where we're going on time.

3. On vacation, our condo unit was on the sixth floor of the building. And every time we'd get to the elevator, Gabe and Cooper wanted to push the elevator buttons. Gabe was always asking, 'what floor?' And the answer was often, 'six,' because our unit was located on the sixth floor. So, about mid-week, Chloe started pointing at the elevator and saying, 'Six,' over and over again. I think she thinks the word for elevator is six. Ooops! Hopefully we can correct that one, cause that could be quite a confusion throughout her life.

5. Chloe is definitely the most animated child of our three. Maybe it's because she's a girl, but she has her own little language that she verbalizes non-stop sometimes. She mixes real, distinguishable words in with her own language, and has plenty of actions to go along with her conversations. Lately, she's been shaking her index finger and saying, 'No, no, no! No, no, no!" Wonder where she gets that from? And I can't forget to mention her facial expressions. She looks really serious one minute, then breaks out into a huge smile the next. This girl has got her verbals and non-verbals mastered.

There's many, many more Chloe facts to share, but I think I may actually be getting tired, so I'll save them for a later post. Thanks for tuning in!
Posted by Unknown at 2:25 AM

AWWWW She just melts my heart! I think the animation is a girl thing. The drama starts :) You think it's cute now, just you wait! LOL
Kenna used to do that laughing with her hand over her mouth too. I had forgotten about that. That's why blogs are great. You can go back and read about all the things you forget..

How cute is she! I love the new pics, she is getting sooo big!