My mom and I could qualify for some sort of marathon shopping award after yesterday.
I used to think people who got up in the middle of the night to stand in long shopping lines are crazy. But one year about 5 years ago we decided to try Black Friday shopping and it's been our tradition ever since.
Yesterday was perhaps our longest day of shopping yet.
We left my house at 3:30 a.m. and didn't return home until 7:30 p.m.
Crazy, I know.
Especially crazy considering that my mom didn't get any sleep before we began our shopping excursion. She had laid down to bed around 10 p.m. on Thursday night, but the anticipation of shopping and knowing she had to get up early caused her to toss & turn all night. I don't even know how she did it, but she was a shopping machine as usual.
I did buy her a Peppermint Mocha Twist from Starbucks to help fuel her with caffeine.
Yummy!
We always go to Younkers first, and this year was no different. We were there at 4 a.m., when the doors opened, and it was worth it. I got Jason some much needed gifts {which I can't divulge here because he actually reads the blog sometimes.}
And, I got two pairs of knee high boots and a pair of dressy black flats for under $90!
Awesome, I know!
We also went to Gap, where they were having a 'buy one get one free' sweater sale.
Sweet!
And many, many, many other stores...American Eagle, Bath & Body Works, Maurices, Dress Barn, Gordmans, Staples, Target, Kohls, Old Navy, Pier One, and Toys R Us, just to name a few.
I did make one purchase I didn't set out to buy. And since I was suppose to be Christmas shopping for other people, I feel a tad guilty about it. But, since Jason likes the new home addition, and likes the price I paid, it makes up for the guilt.
Here it is... 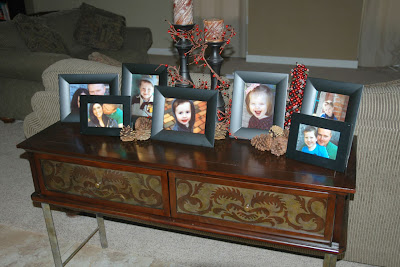 A sofa table from Pier One, regularly $400 marked down to $98 {it has a small nick on the top, so I got it cheaper!} Now I have more space to display photos, since I'm running out of wall space. I was so excited, I already have it all decorated!
Anyway, great shopping day for us!
Not so great for some people.
Jason ran across a news story of a deadly shopping encounter at Walmart in Long Island, New York. One Walmart employee was killed and another pregnant employee was injured when shoppers broke down the doors to get inside the store. Check out the New York Post story, complete with video footage, here.
Crazy!
But what do you expect at Walmart, right?!? {Yes, we are snobs and don't go to dirty gross Walmart unless we absolutely have to, maybe once a year.}
Hope your Black Friday was as merry as ours!
Posted by Unknown at 1:41 PM

And here I thought you were going to this I was insane for shopping all day!!!! I should have known you and your love for clothes would be enough to lure you into the craziness. Good job on the boots! I got a couple sweaters that are too cute.. cheap! I mean really you can't only get things for others when you are going to that much work :)

I mentioned to Tina how insane I thought New York had to be. That is terrible! I mean I love a good deal but even I draw the line there! It sounds like we were at all the same stores.. I guess the other 5000 people shopping got in the way of us seeing eachother ;)

LOVE your table! And it's decorated soooo cute. Good job on that one!!!!