Thankful For My Children: Part 2

Continuing my thankful-themed posts, I want to thank God for Cooper.
Cooper, like Gabe, was easily conceived, but unlike Gabe, didn't cause me to be sick the entire nine months of pregnancy. After about five months of sickness, I felt much better, which to many may still not sound like a cakewalk, but after my first pregnancy, to me it was.
The doctor did ultrasounds throughout my pregnancy since I was again measuring small and my first pregnancy produced such a surprisingly large outcome! At one of the ultrasounds we found out we were having a boy. I remember I was so happy, thankful for Gabe to have a brother to play with.
Cooper was born on June 10, 2005, and weighed in at 8 pounds, which seemed tiny after his 'big' brother. He was a good baby from the start, sleeping through the night within the first few weeks home and content most of the time.
We often refer to Cooper as 'little Coop' because he's so small. At three and a half years old he only weighs about 32 pounds. But there's a whole lot of sweetness packed into that tiny little body. Cooper is the one who often grabs my face in his little hands as to make sure he has my attention and says, 'You're my best mommy ever!' And he means it, so genuine and sweet is that boy!
Cooper is happy-go-lucky, well, most of the time. I have to say, Cooper went through about 2 or 3 months of the 'terrible two's' that every once in a while still rears its ugly head to this day. When I tell others that he can be quite a little stinker, they often don't believe me because Coop is usually well behaved. But believe me, he does have an ornery side. But one little smile can make you forget any wrong he has done.
Cooper loves trucks and tractors. His grandparents call him their 'tractor boy,' which is so fitting. I wouldn't be surprised if he grows up to be a farmer.
Cooper also LOVES Christmas, definitely a child after my own heart. He points out anything vaguely relating to Christmas...lights, wrapping paper, ornaments, etc., and says, 'Look! It's Christmas!'
Cooper enjoys playing with other kids and especially likes to interact with younger children and babies. He goes right up to toddlers and starts 'helping' them as he calls it, getting them toys or singing them songs. I think that's why he loves to be in the nursery during church, because I get reports that he is just another one of the helpers. I've also found Cooper taking a front row seat to different babies just to watch them sleep or to talk to them in his sweet little voice. If his behavior is any indication, I think he'll make a great dad someday.
I could go on and on, but I'll just end with one final thought.
Our lives would be a whole lot less sweet without our little Coop. What a special kid.
Thank you God for Cooper! 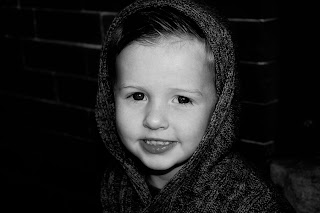