School was let out early today due to the snow storm.
This is what I see at the door after Gabe gets off the bus... 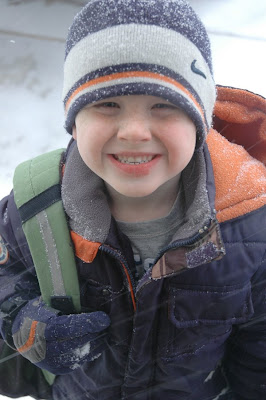 All smiles.
Like most kids, Gabe loves to play in the snow.
While watching him out of the window from the warm house, I notice Gabe definitely finds some very unconventional kinds of snow play like trying to ride his bike.
That didn't work too well, so then he tried riding the trike. I need to explain that this isn't any ordinary trike. No, this trike has monster size heavy duty wheels, a present from farm grandpa & grandma for Gabe's birthday a few years back.
Since moving onto his bike, the trike has become Cooper's, but Gabe still rides it every now and then.
But, even with those monster tires, the trike got stuck.
What's a boy to do, you may ask?
This of course... 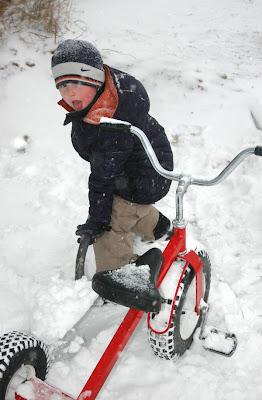 Grab a shovel and get to work.
{He may be odd, but he's also quite resourceful.}
While outside with him taking these photos, Gabe was explaining to me what a pain it is to have to shovel out his trike. So, we started talking about his predicament.
'Of course you're stuck. You're trying to ride a trike through the snow,' I said.
Gabe replied, "Well, I wouldn't be stuck if I had four-wheel-drive!"
How do you argue with that? 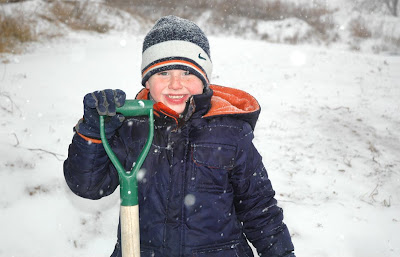 {From Kinzley}I like your pictures in the snow. Good thinking with the shovel!

Gabe says, blushing and smiling from ear to ear, "Thanks Kinzley!" lol.