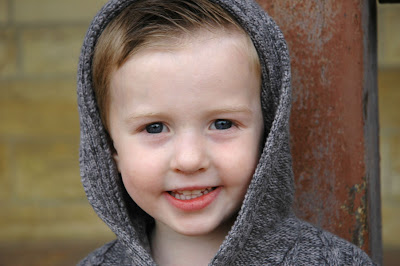 Cooper says some pretty silly things sometimes. And often these silly statements are completely random and out of the blue. There's no rhyme or reason, he just says whatever comes to mind.

Today, it was about Grandpa...

Cooper: Hey Mom. What if I'd be Grandpa and I didn't have any hair. That would be funny, wouldn't it! {The fact that he was laughing hysterically made it memorable. He was really cracking himself up!}
Me: Yup, funny Coop.
Cooper: Can I be Grandpa for Halloween then?

Hmmm...That's definitely an unusual Halloween costume request, and a whole year early too! We'll see if he remembers this come Halloween.

Later, we were watching Jon & Kate Plus Eight, one of my favorite shows. If you don't know about them, where have you been? But to fill you in, they are a couple who have one set of twins and one set of sextuplets, hence the 'plus eight.'

Coop likes to watch the show too, and turned to me in the middle of the show and said,
"Mom. Can we have eight kids too?"
I said, "Ummm, I don't think so Coop."
He said, "Maybe just three then, and we can name them Gabe, Cooper and Chloe."

Wouldn't that be a bit confusing?
Silly Coop.
Posted by Unknown at 7:56 PM

I love Cooper stories! He is such a funny little guy.
I LOVE Jon and Kate plus 8. I hear I am getting their book for Christmas :)

(BTW, Tim dropped a pan on cinnamon rolls off at your house tonight. I think he left them on the step. In case you were wondering where on earth those came from LOL )