3 Kids on a Couch

I had been upstairs this morning doing a load of laundry. When I came back downstairs, this is what I saw: 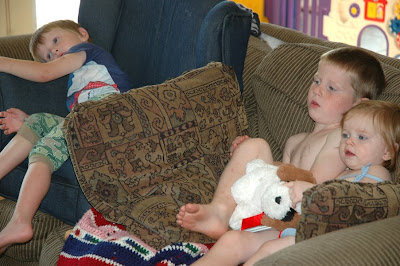 Gabe had gotten the boys' little recliner from their room and put it up on the couch because, as Gabe explained to me, "Cooper likes to sit on it and he wanted to sit right by Chloe and me!" So what you're looking at is Cooper sitting in a little recliner that is sitting on the couch.
All three of them were watching cartoons, and don't they look slightly hypnotized?!?
{Just a side note: In light of the recent posts displaying photos of my kids watching TV, I have to add that they really don't spend all day watching TV. They have already been outside playing this morning for about an hour, but it was 'too hot,' they said. I promise, the television is not a babysitter in our house, lol! Ok, now I've gotten that straight, for the record.}
Posted by Unknown at 10:13 AM