I thought I'd start the many posts of photos there will be about our trip by showing what we did to minister to people while in Nicaragua. Basically, we arrived in Managua, Nicaragua on Sunday, rented vehicles and drove 4 hours to the city of Ocotal where we spent the night at a church/house. On Monday morning we drove about 3 hours to the village of Santa Maria. This is where our actual ministry began.
As soon as we drove up to the village church, the people began to flock to us. They were fascinated with us, as many of them had never seen white people before. They were especially amazed by the several blond-haired members of our team. It was odd to be getting so much attention, but so awesome to be able to use that attention to share the Lord with the people. Basically, it was our job to get the people involved in games and activities and to keep them entertained & build relationships with them so that we could later share the Gospel. We were able to tell them about Jesus and share the love of Christ through some skits which utilized only music, not words, and through the movies we'd show in Spanish. It was amazing to see how much communication could be done through actions instead of words, since the people in Nicaragua speak Spanish and most of our team knew little or no Spanish. The Lord can do great things as long as we make ourselves available for His use, even when it seems impossible.
We also ended each night by giving a Gospel presentation through interpreters. We did the same ministry in another nearby village that was about a 30 minute hike and through our visit to the two villages, approximately 25 people made a commitment to Christ and several more expressed a desire to know Him more. It was awesome to be tools that the Lord used to share the love of Christ with people and to overcome language barriers to do so.
Below is our group. There were three leaders and six teens from our church. 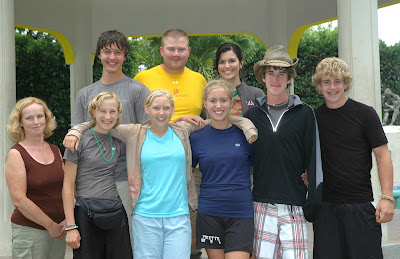 Here's our leader, Terry, and Jason. Terry was our guide for the week and is a missionary for XMA, Extreme Missionary Adventures, which was the group we worked with for our trip. We packed up our rental truck with our luggage at the airport in Managua and were ready to begin our extreme adventure! 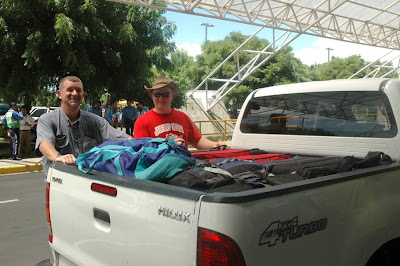 This is the church in Santa Maria that we worked out of. It was very possibly the nicest building in Santa Maria, not at all a representation of what the village looked like overall. 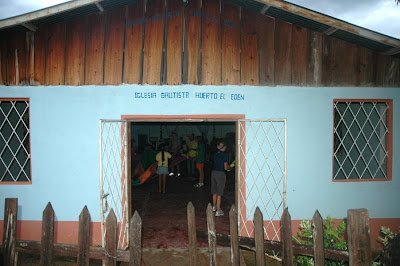 The kids were so available and excited to play games. {The inside of the church was dark, even in the daylight, so it was hard to capture great photos without an external flash. I really need to get myself one of those!} 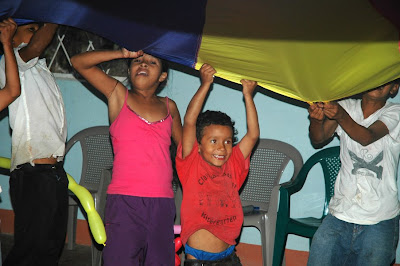 We made balloon animals and things out of balloons that I'm not so sure what they were to tell you the truth. But the kids loved them! Below is a sword fight. Look at that form...I think the boy on the right is a natural! 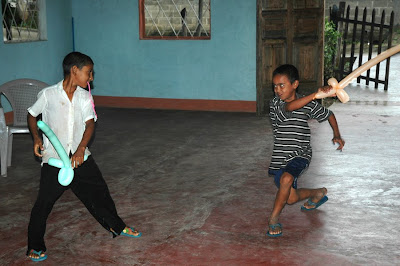 This boy thought his balloon hat was so funny! 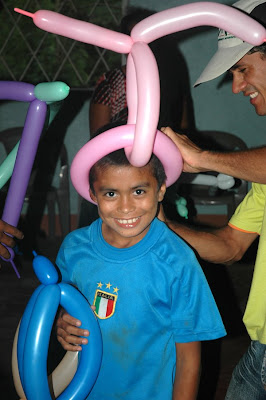 We also brought coloring pages in Spanish that shared scenes from the Bible. The kids don't have colors and so this was a real treat for them...especially the girls! 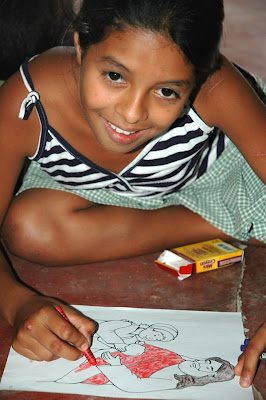 I couldn't get this little girl to crack a smile. But she was so cute and made me miss my own kids! 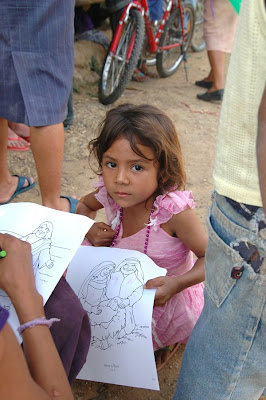 We also did a lot of jump rope, which was fun for both little and big kids (notice Jason's jump roping skills.) 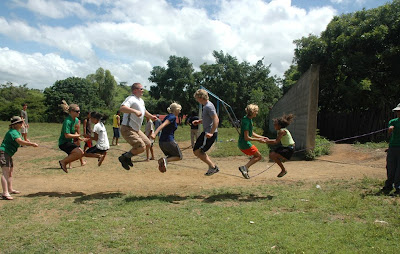 The kids presented a skit entitled, "redeemer" which conveys without words the rise and fall of man to sin and the redemption we receive through the gift of Jesus. Below are three 'demons' beating Jesus. It's quite a powerful skit and hopefully made a big impression on the people. 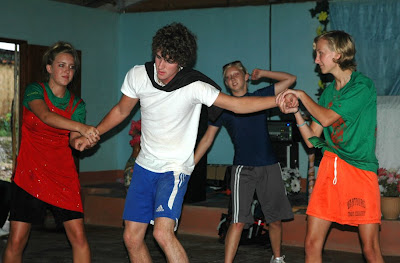 We brought along EvangeCubes. It's a seven-picture cube that clearly and simply unfolds the Gospel of Christ. It's a great and easy way to share the Gospel with people. Below are Allie & Lexy, sharing the cube with some kids while one of our interpreters, Raul, talks to the kids in Spanish. 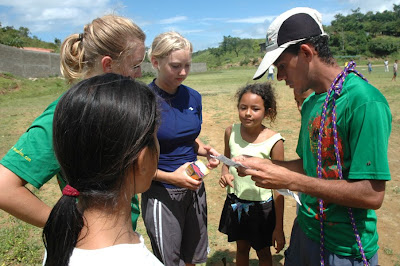 I have many more photos to share, so stay tuned for more posts about our trip!
Posted by Unknown at 12:07 PM