Just the Two of Us

Cooper & Chloe are becoming good buddies since Gabe is at school.
When Gabe is home during the day, he loves on his sister and takes care of her, hardly giving Cooper a chance to interact with Chloe.
But now that Cooper is the big boy at home during the day, he has taken it upon himself to take care of Chloe. He gets her drink for her, gets her toys for her and tells me when she's ready for a nap. {This happens whenever she cries. To Cooper, Chloe's cry signals that it must be naptime, like today when I discovered him trying to put her in the laundry basket and then push her around in it on the tile floor. She was crying, I came to the rescue and Cooper said it's because it's her naptime. Funny boy.}
Of course, it's a little lonely at times with Gabe not here. Gabe's absence during the day has been a transition for all of us, including his brother, evident when Cooper asks several times a day, with those big sad eyes, "When is Gabe coming home from school?"
But seeing a new bond form between Cooper & Chloe has been sweet. 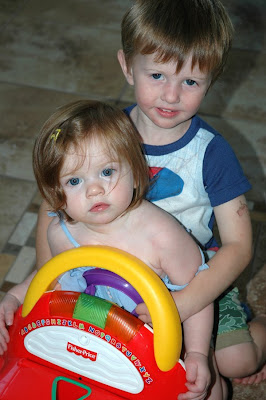 I had been doing bills when Cooper yelled, "Mom, get your camera and take a picture of this!" I looked up and saw the two of them on Chloe's ride-on car, both with big smiles on their faces.
"I'm helping Chloe ride cause she's my friend," Cooper said.
That's all it takes to melt a mother's heart!
Posted by Unknown at 9:37 AM