Gabe had surgery this morning at 8 a.m. to have a tube removed from his left ear. Gabe had originally had tubes put in his ears when he was about 14 months old due to reoccurring ear infections and fluid trapped behind his eardrum. They are suppose to fall out on their own, which the tube in his right ear did, but the left ear tube was stubborn and the doctor decided to remove it.
The surgery was fast and easy and Gabe was the perfect patient...'very brave because I'm gonna be a kindergartener,' as he says.
But after we returned home, Gabe decided to take his shirt off because he was hot and found that the nurse forgot to take the monitor pads off his chest.

"What are these?" Gabe immediately asked me as he pointed to the pads stuck on his chest. I decided to take the opportunity to have a little fun with him...
"Oh wow Gabe, the doctor put laughing pads on you when you were asleep," I told him.
"What in the world are laughing pads," Gabe asked.
"Well, they're pads with buttons on them. When you push on the buttons, you'll laugh!" I explained.
"No way!" Gabe replied, laughing already.
"What? You don't believe me? Then let me push them and you'll see what happens!" I said.
Gabe replied, "No, you can't push them," still laughing, and covering his chest with his arms so that I couldn't touch the pads.
"Come on, just let me show you what they do!" I told him.
"Ok," Gabe said, and slowly uncovered his chest.
As soon as I pushed the buttons, of course Gabe started laughing.
"They really work!" He said.
This kid is so ticklish, he doesn't need any buttons to push anyway! He's too funny! 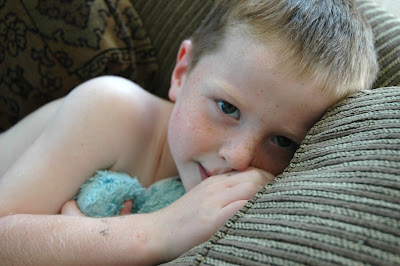 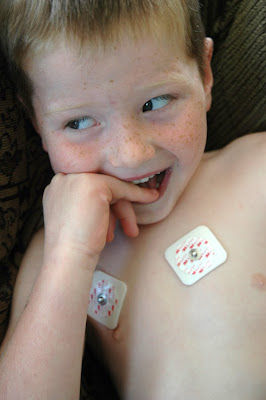 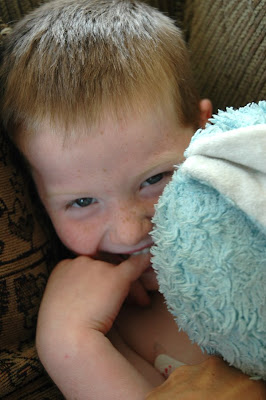