I wanted to post a few of my favorite moments from today so that I can have a record of these moments and don't forget them. After all, that's in a way what this blog is about. Having a record for myself and getting to share the moments with all of you!

Story 1:
Cooper was acting a little out of sorts as Gabe got ready for school. I thought to myself, 'Is Cooper sad that Gabe's leaving for school, or am I just reading into his clingy behavior?' My question was soon answered...
As I was holding Cooper, Gabe came over to tell us goodbye before he left for school. Gabe told me goodbye first, and then turned to Cooper who was sitting on my lap and said, "Bye Coop!" Cooper looked at Gabe with big, sad eyes and in such a genuine tone said, "Bye Gabe! I'll miss you!"
If that's not precious enough, Gabe's reaction only added to the moment. A huge smile overcame his face and he gave Cooper a hug and said, "Thanks Coop!" Little details like that make such a priceless moment between two brothers, two playmates, two friends.

Story 2:
When I picked Gabe up from school, he was happy to see me, but holding back from telling me too much about his day. It's like he's already reached that middle school mentality that a lot of kids that age have where they're too cool to show too much emotion. Gabe's been in that stage for a while now. I asked him how school was, and he replied, 'Good.' Then I thought maybe that was too general of a question, so I asked him how music class was. His reply: 'Good.'
Same when I asked him about recess, lunch, meeting new friends, playing with old friends, his teacher, library, etc. All questions yielded the same result...'Good.'
But after we got home, he couldn't hold it in anymore. The act of playing cool was over, and one by one the details started to reveal themselves through Gabe's overflowing excitement.
I have many examples, but here's a couple of the more humorous ones...

Gabe: 'Hey mom, you know what?' *Not even waiting for my response he continued...* 'I painted a picture today!'
Me: 'Wow, that sounds fun! What was the picture of?'
Gabe: 'Ummmm, I don't know yet. I'm still trying to figure that out.'

These are the stories, brief moments in time that are gone unless we write them down. So, here I am, doing just that.

And now to end this post, as the old saying goes, a picture speaks a thousand words. So, here are some of those too... 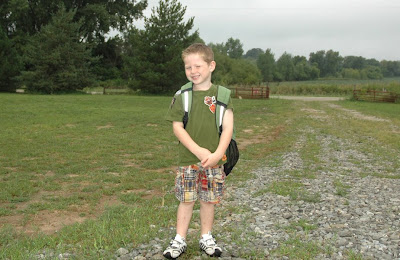 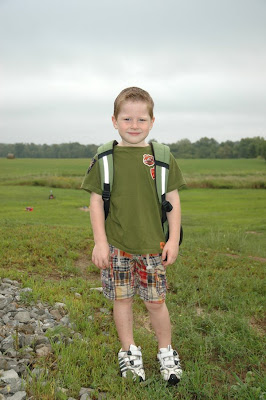 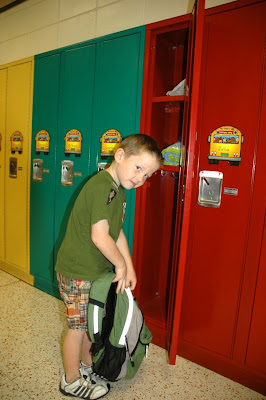 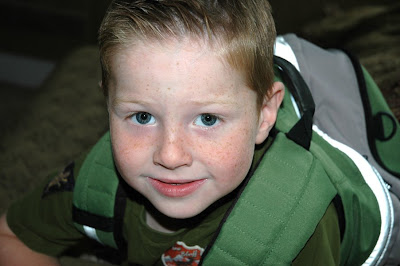